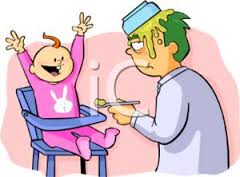 This morning we had another battle of wills. The Little One is scrappy, I must give her that. She is tenacious, scrappy and unrelenting. These traits will no doubt stand her in good stead in later life. I only wish they were not directed at me during meal times 😦

This post might be irrelevant, even boring perhaps to folks who do not have children (of any age dare I say!). And those who do have kids; if they don’t particularly hate food or eating in general then you might wonder what the big deal is. Only a parent that is facing a similar situation can truly commiserate.

I too would not have understood. From the age of 6 months, when she was first introduced to “food”, to about a year, the Little One adored num- nums. She was the poster child for healthy, enthusiastic eating. I was repeatedly congratulated by relatives and other mothers for birthing an “easy” child; one who never fussed at meal times, one who never made a mess, one who gave me no trouble. I basked in the warm glow of all this flattery, and secretly thanked the universe.

I blended and pureed. I boiled and blanched. I cut up everything into perfect ‘little-people-cubes’ and put them on colorful, unbreakable plates. The Little One had no teeth, but that didn’t stop her from chomping down on the grub. She grabbed things from our plates and if soft enough, managed to even eat them. By seven months, with barely there motor skills, she really could feed herself satisfactorily (conditions apply). No kidding!

She loved everything I fed her, and gobbled them up  in no time. Bananas of course were her favorite. Life was a breeze. I wondered why mums complained. Duh! Babies are so easy!

I guess that is when I jinxed myself.

Bananas were the first to go. From the list of “foods Zoe eats”.

I am not sure when my old, easy Zoe left and when this new, anti-food Zoe arrived. Slowly, one by one, she started ticking things off. People told me it is a phase that many babies/ toddlers go through. I nodded. I waited. Phase means temporary right. So this should pass quickly. Or so I thought.

It has not. We are now at a stage that every meal is a bit of a event. I distract. I beg. I negotiate. I plead. I sing. I dance. Ceasefire.Her Highness may or may not eat.

And no matter how much I try, I cannot switch off the “mommy- worry” button in my head. Now that she goes to nursery, the food woes have only compounded.

These days, I don’t pray that I get to scrub- in for a cool, complicated case, that I’d win the lottery, or that I’d bump into a younger Jude Law at the airport; I pray for an easy meal day, nothing more.

I have tried bland, sweet, savory, spicy… I am yet to decipher her peculiar food likes and dislikes. They are so all over the place, that I’m unable to trace a trend or pattern.

So, how have we been coping? How have we managed to keep the extreme dieting toddler alive?

(I am hoping this post will provide some solace to other mothers/ parents out there who are facing what we are facing at the moment. I know how it is to run out of ideas, and when everyone around you has an opinion and well- meaning advice but has no clue what you are going through.)

As parents, this is probably the hardest thing to do- letting them be. My Little One likes being independent I have realized. Both in thought and action. She is not the overtly clingy baby who likes to be cuddled all the time. She seems to like her time and space. She is not thrilled when I have the spoon in hand. She HAS to be in control. She will not get to the food immediately whenever I place something in front of her. She takes her time, and does things whenever she wishes to do them. Pushing her means I’m pushing it. Cajolement, coercion and gentle encouragement doesn’t seem to work either. She will eat when she wants to. Period.

It is best if I place a snack or a drink somewhere in her vicinity while she is playing and then hope for the best. Unfortunately though there is always somewhere to be, something to be done. And the inconsistency of behavior (will she or wont she) isn’t easy to stomach.

Someone once told me that children at this age can never be bored. Apparently they aren’t developed enough to know what different foods are, and that they can be easily tricked or fooled.

“Someone” obviously haven’t met my Zoe. In our household, repetition equals death. If I put the same thing on her plate two or three days in a row (irrespective of how tasty, or how much she ate it the last time) she will most likely reject it. Hence, I’m forced to get creative and think out of the box everyday. Literally!

Too much change is no good either.

It’s confusing I know, but even though she doesn’t like the same food everyday, she is also very resistant to new foods. She is not very adventurous with grub and getting her to try something new is an arduous task. All we can do is rotate the things that she will eat around with adequate breaks in between. And introduce new things as a snack first, and not as a meal.

Patience is a virtue.

Patience is definitely NOT one of my virtues. But it would have been a great help in this situation if it were. When it comes to dealing with the really young, I think that is what it all boils down to- patience. I have noticed, the angrier and the more impatient I get, the more adamant and fussy my Little One becomes. Then Pappaa has to swoop in and save the day.

A skipped meal is not the end of the world!

This was a hard one for me to learn. Just like how we have good days and bad days and just like how we sometimes just don’t feel like eating; babies/ toddlers too seem to have their moods. If she plays around with her food for over an hour, and doesn’t seem to be interested at all; I just clear up and offer some water. Which again she might or might not refuse. In such cases, she will usually clean up a snack in the next hour, or will have a hearty next meal fuss free.

For my Little One, breakfast is a struggle. Unlike her Mammaa who wakes up each morning stark, raving hungry and can eat the entire pantry for breakfast, Little Zoe is not too fond of breakfast. One would assume a baby would be really hungry first thing in the morning, apparently not. So, now breakfasts are simple, casual afairs. If she eats, fantastic; if not, no big deal.

There might be particular foods that they like and some they absolutely detest. I have learnt the hard way that even if the item in question is super- healthy, there is no point in trying to force- feed it. Trust me, it never quite goes down well. In our case it is egg yolk. God forbid I try to sneak it in some other food, Lil Ms Z will refuse all food for the next four hours or so.

I once had visions of my Little One sitting on a picnic blanket in an idyllic seaside garden chomping down on mini cheese sandwiches. She wore a spotless, floral frock and had tanned, chubby legs. In my vision, I wore a serene expression and black and beige Chanel ballet flats.

That was when she was a newborn and I was a delusional, clueless first- time Mum. Cut to reality and one learns that things are never the same like they are in the movies or in baby blogs. And all those protocols, baby- led this and that, don’t -instill- harmful- habits- young advice is meaningless. You do what you gotta do. To survive each day.

So yes. Call me a horrible mum. I let my not-yet one and a half year old watch cartoons when she is eating, if it means she WILL eat. I distract her with toys. Breakfast is sometimes had on the go, and not “sitting- down” at the high chair.  On a particularly bad day, we sometimes go to the park, or the beach just to get her to have a banana. So yes, distraction sometimes is the savior.

Be open. To everything.

Expect nothing, except the unexpected.

Oh yes. Do not for a moment kid yourself by thinking that she will eat that cheese pasta tomorrow just because she cleaned it up on her own today. No mam.

Nothing is constant. I’m not sure of all babies, but mine is utterly unpredictable; I’m always kept on my toes, literally and otherwise!

When all else fails, try again!

If nothing works, then go back to the beginning and try again. Just because they rejected something sometime, does not mean it will never be accepted ever. Visit foods again at a later date, in a slightly different form if possible.

I am certainly no expert, and this is yet an ongoing process of trial and error. The key is to beat your child at being relentless. Never give up. To be honest, I type this post mainly for myself. As a reminder. It helps to put things down, to put thoughts into words. It gives you perspective, and on a day such as today (when breakfast AND lunch were epic fails) I’m in dire need of fresh perspective!

2 thoughts on “Ma Wednesday- The toddler who hates to eat!”