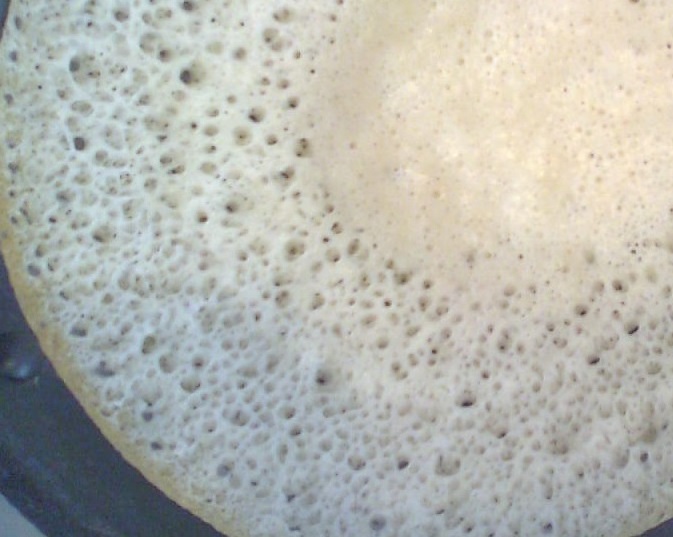 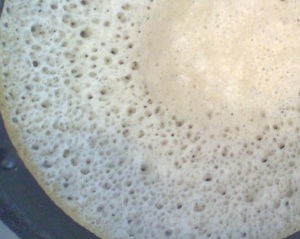 The quest for the perfect appam….

My fellow mallu’s (those who inhabit or originate from mallu land aka the banana state – Kerala) will know exactly what I am talking about. The perfect appam is different for different people. For me, they are magical things. I can wake up in a grouchy mood, sit at the dining table with a grumpy face…… eat an appam…and lo and behold… the world is a better place!

They are beautiful, sorcerous things; these appams. Poured onto gently curved pans which caress and shape them, they appear like the progeny of ocean pearls and French lace.  Wafts of steam gently rise from their surface as Mum softly places them on my plate. I like the edges to have a slight crunch and the centre soft and spongy. Dip them in some stew, or meat curry, or chickpeas gravy or even with just some good ol’ sugar and they melt in your mouth and fill your soul . Heck, I can even have them just as they are.

The minute I moved away from home, the aappam became an oft craved but rarely begotten delicacy. Even if I managed to find one, they were no match to the one’s I had at home. Both my Mum and my other Mum (Mr H’s Mum) are well chronicled appam experts. So Mr H and I were both used to the best.

One of my first goals after setting up a fully functional kitchen of my own was- making delicious home-made appam and mutton stew. I had all the ingredients to make a fantabulous appam:

Everything was in place. I was in a perfect state of mind. I had no doubts regarding my abilities. I had done my research. The ground work was complete. I called both my mums one last time before I started. To corroborate certain minutiae and to seek their blessings. I soaked the rice for over 6 hours (just like they told me to). Made the perfect looking batter.

My perfect appam never came. The batter never rose. The appam looked like cheap polyester rather than pricey French lace. Had the texture of poorly cooked pasta. The only saving grace was that they smelled like appams, if nothing else. Mr H gamely chowed them down. The mutton stew helped I guess. I was dismayed. I had prepped well but I hadn’t prepared myself to fail. My confidence (bordering on arrogance) crumbled. The humble appam had humbled me.

For a while, we bought pre- made aappam batter; whenever we had the intense urge to eat them. They were nothing like what we used to have at home. Our mums had set high standards. But they would do. For now.

All the while, I felt inadequate and inept. I could not make good appams! How would I be a good wife/mother/surgeon/woman…..? Everything now relied on those darned appams. So I decided. Aappam, thee I shall master. I girded up my loins.The pursuit for the perfect appam had began…….

Ask my mum and she will say…”well you need ‘paccha ari’ (literal transalation- raw rice) but dear any rice will do- there will only be a minor taste difference”. Yeah sure. Very helpful. At the supermarkets here, there are dozens of types of rice. I started with basmati rice. (Thinking that the most expensive will be the most suited). The aappam tasted okay. The next time- I hunted for a mallu  gentleman at the store and asked him what rice is used to made appams. He pointed to packets labelled as “white rice”. Hmmm…

Food bloggers online though encouraging can sometimes complicate matters unnecessarily. I should have just kept matters simple. Like how we do it back home. No fancy coconut milk. No messy extractions. Just buy grated fresh coconut and use that.

Step 3- The business of fermentation

My appam chronicles commenced in the winter. I just could not find a warm place at home for the batter to rise. For those who think I live in dessert, it does get pretty nippy here in the winters. At home, we rarely use yeast. I decided to use yeast to help matters. Active, instant, inactivated…. Ugh… So many types… I settled on instant.

Step 4- The matter of some water

The right amount of water while making the batter treads a thin line. Found out that both too much and too little can be a bad thing. Pour just enough to make a fine batter. More can be added as required later.

A well-seasoned “appa-chatti” (curved pan used to make aapam- like a mini wok) is paramount. I did not want the fake non- stick ones. Hence, bought a super heavy, authentic cast iron one from Kerala. Religiously, lovingly massaged sesame oil onto it and heated it every night- till it was smooth and gleamy.

All this and still something was missing. The appams now looked like appams and felt like appams. They even tasted like appams! But they were far from perfect.

During my appam adventures, there were several accidents. After all, it’s J we are talking about. A cast iron pan means burned fingers. Over enthusiastic use of yeast lead to almost mouldy smelling appams. Once, I followed some “internet advice” and kept the prepared batter in my cupboard (the warm place) for it rise. Used the biggest container I had. The next morning, there was aappam batter everywhere. Mr H was sure he had heard an explosion during the night! And I had to load a machine full of aappamised- clothes.  Appam batter apparently makes a great fabric conditioner.

I made paper aapams and card- board aappams. Gooey ones and extra dry tasting ones. Ones with no holes and others with too many. Brown ones and yellow ones.

First I blamed myself. Then I blamed the appa-chatti (pan).The rice came next. Then I told Mr H that maybe the brand of yeast I use is not good enough. I finally blamed the weather here. Mr H patiently listened. Ate all the myriad types of aappams that landed on his plate. One day he caught me in an exceptionally good mood (after buying me something I’d wanted for a long time) and told me “Honey, why don’t we give it a break” Give what a break? “The poor appams. Let them rest. They are tired. We can try after a while- A few years maybe”…. Huh…. My resolve wavered. My pursuit halted.

Couple of months later, my Mum came down to visit. She decided to make breakfast. My only request was…..yeah… you know by now ..I was appam obsessed. But I warned her. They will not come out right because ‘the weather here is not right’.

The next morning…. I woke up to………..PERFECTLY made AAPPAMS! I was embarrassed to sit in front of Mr H and eat them. He flatly denies it but I’m certain he had a sarcastic smirk on him that morning.

I asked my mum to make them again, for the next morning. And I watched closely. Saw the things I was doing wrong. Saw, how simple things actually were. She didn’t even need any help from the nasty yeast. The batter rose perfectly. The texture was perfect. The taste was perfect.

I now make great appams! Excuse my vanity. The pride is well placed and deserved. Mr H agrees. I was doing things ALMOST right- the process needed slight tweaking, that’s all.  The pursuit has not ended though. The pursuit for perfection never does…..